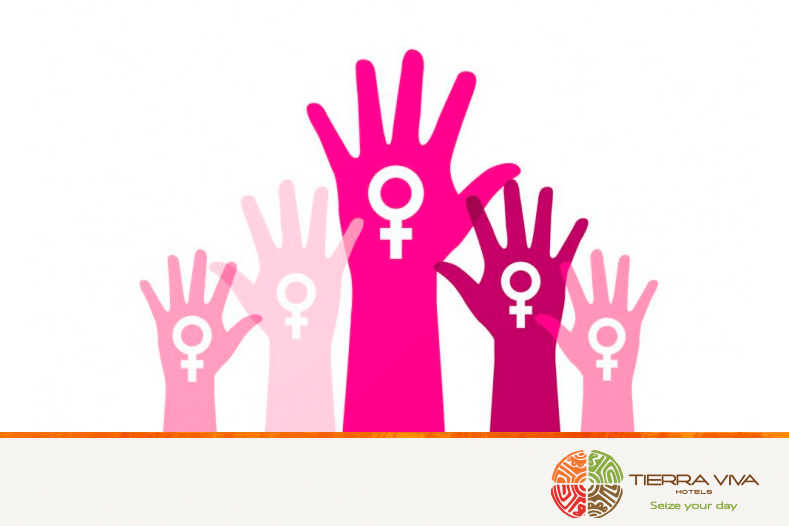 When you walk through the different cities of Peru and notice the name of their streets you realize they have something in common: the vast majority of them are dedicated to male characters in the history of our country.

What happen with the Peruvian women? Where were they when these men signed the deeds that would lead them to be recognized as national heroes? On International Women’s Day we want to make visible all those Peruvians women who also forged the history of our country and who deserve a bigger space in the avenues and in all the cities of Peru. Although almost anybody talked about it, there were also women who played a very important role in the independence of Peru. One of them was Micaela Bastidas, who in 1780 participated actively in the overthrow of the magistrate Antonio de Arriaga and in the subsequent rebellion of Tupac Amaru II, leader of the movement and husband of Micaela Bastidas.

The life of this heroine of the Peruvian independence ended when the Spanish conquerors neutralized the rebellion and arrested her. On May 18, 1781, after seeing how one of her children was executed in the Plaza de Armas of Cusco, she was murdered, before the eyes of her husband, who was also executed later. The mysterious Nazca Lines are known throughout the world for the unknowns they still hide, but all we know about them we owe it to a great archaeologist and mathematician: Maria Reiche.

Although she was born in Germany and she did not settle in Peru until she was 36 years old, no one doubts that Maria Reiche is Peruvian. The enormous contribution of her studies to the history of the Nazca Lines and the help for them to be protected have granted her a giant space in the hearts of all the Peruvian people. Although the history of Peru teaches us that it was carried out by men, one of the people who has dived the most into the details of our past is a woman. Maria Rostworowski, a historian who wrote important books that help us to understand pre-Hispanic cultures and the Inca Empire.

Her writings are the perfect manual for those people who like to immerse themselves in the chronology of a country before visiting it. If you want to know her work, we recommend you to start with Historia del Tahuantinsuyo and Pachacútec. After reading these books you will travel to Cusco and Machu Picchu with much more excitement. Peruvian and Latin American poetry could not be understood without the voice of Blanca Varela. This Peruvian woman, who began her foray into the world of writing when she entered the University of San Marcos. She traveled years later to France, where she met  other women who made an impact in history, like Simone de Beauvoir.

Her poems, widespread in more than 10 books, have been translated into German, French, English, Portuguese, Russian and Italian. In addition, in 2016 she was the first woman to win the Federico García Lorca International Poetry Prize.

If you walk across the Puente de los Suspiros in Barranco, you will run into one of the few statues in Peru dedicated to a woman. It represents Chabuca Granda, one of the most emblematic voices of Peruvian Creole music.

Her most famous song, La flor de la canela, crossed the borders of Peru and became one of the hymns of the Lima of the twentieth century. Walking through the streets of our capital listening to the songs of Chabuca Granda will make you enjoy the city with the spirit of this great singer.

Filmmaker Claudia Llosa is known for opening the doors of Peruvian cinema to the world. With her film La Teta asustada , in which Magaly Solier, another Peruvian woman worthy of mentioning, appears as the protagonist. Llosa got the Golden Bear at the International Festival of Berlin. In addition, this movie was recognized as the first Peruvian film nominated for an Oscar in 2010.

Since then, Claudia Llosa’s career has been constantly growing. In 2014 he premiere her first English-language film, No llores vuela (Aloft), and in 2015 she was a jury of the Berlinale. Currently she is shooting Distancia de rescate, a movie based on the book of the Argentinian Samanta Schweblin and which will be released by Netflix. The rhythm of Afro-Peruvian music is what marks the songs of the composer, researcher, educator and singer Susana Baca. This Peruvian woman, who was named by Chabuca Granda as her successor, is the only one in our country who has achieved two Latin Grammys; the first one for her album Lamento Negro and the second one for her collaboration in the Latinoamérica, a song by Calle 13.

In addition, Susana Baca plays an important role in Peruvian and Latin American politics, as she was Minister of Culture and President of the Inter-American Committee on Culture of the Organization of American States. In recent years, Peruvian cuisine has become a benchmark around the world. However, the protagonists of the gastronomic success are always masculine. But working side by side with these chefs are women with the same dedication. One of them is Pia León, who was chosen in 2018 as the Best Female Chef of Latin America.

After 10 years as chef in Central, a restaurant created with her husband Virgilio Martínez, and having brought this place to become the Best Restaurant in Latin America, Pia León opened its own place in 2018: Kjolle.

The passion and strength of these women breathes in every corner of our country. We wait for you in Tierra Viva Hotels so you can explore the streets and the places where the most emblematic Peruvian women live.

Arequipa: 7 plans to do with children

Ironman 70.3: the most demanding triathlon returns to Lima in April
Scroll to top