OUR HOTELS IN AREQUIPA

Discover the colonial city of Arequipa, built with sillar stone 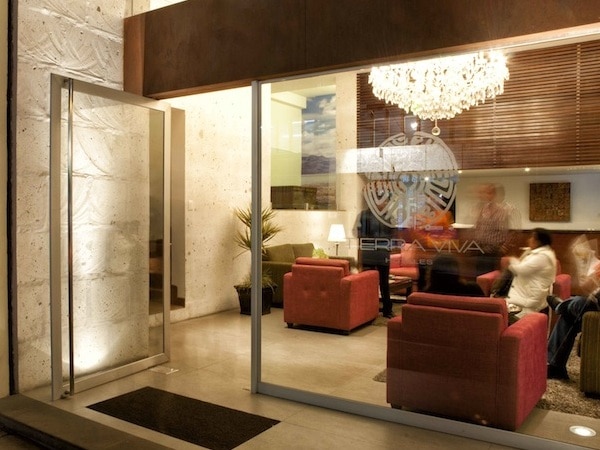 The City of Arequipa

Arequipa is Peru’s second largest and one of its most Spanish cities. One of its highlights is its historical center, with its churches and residences built with sillar stone, product of the nearby volcanoes. Founded on August 15th, 1540, on the valley of the Chili river, it is a luminous city, with a mild climate and one the most renowned gastronomies in the country.

Other highlights include its beautiful churches with very heavily decorated facades, such as the Cathedral and the temple of the Compañia de Jesus, and its convents, such as San Francisco and specially, Santa Catalina. In the Santa Catalina Convent you may walk through its colorful streets named after Spanish cities and admire its patios and gardens, the rooms where the nuns lived, and its great collection of mural paintings and religious art. The great historical treasures of Arequipa’s center motivated its designation as a World Heritage by the UNESCO.

Arequipa is also the starting point to travel to the Colca Canyon, one of the world’s deepest natural accidents, which can be reached after 4 hours of journey by car.

The 16 towns surrounding the Canyon preserve beautiful churches, which have been recently restored, gorgeous popular art expressed in their hats and weavings, and ideal natural sceneries for the practice of adventure sports.

Adventure sports and activities may also be practiced in the city of Arequipa itself, on its green, and sunny countryside. Many tourist operators who work with us offer walks, horse rides, mountain biking and river rafting. On the countryside you will also find many of Arequipa’s most traditional restaurants and picanterias, as well as the Sanbandia Mill, which is still operating as it did in 1621, when it was inaugurated by Francisco Flores.

Some of these adventures and experiences can take you all the way to the top of the Misti, Arequipa’s most emblematic volcano, from where you will be able to admire some amazing views of one of Peru’s most beautiful cities and the valley where it is situated.