OUR HOTELS IN MACHU PICCHU

Free Breakfast & Wifi! Book now and pay at the hotel. 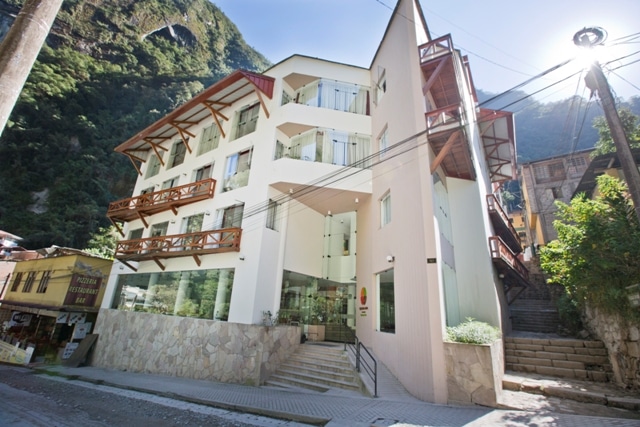 Machu Picchu Hotel is located in the Historic Sanctuary of the same name, a protected natural area of over 32 hectares. It is known worldwide for its impressive archaeological sites, more than 200 among which the citadel, and the Inca Trail that runs through the Sanctuary from west to east in a course of four days, outstand from the rest. For these reasons, UNESCO considers it a mixed World Heritage Site (both cultural and natural).

The Sanctuary has the peculiarity of being a transition zone between the Andes and the lowland rainforest, creating a unique biodiversity. With mild climate and high rainfalls ,it shares samples of the fauna and flora of the high mountainous areas and the ones found in the Amazon. Is the ecosystem of mosses, lichens, bromeliads and ferns, including the arboreal, a very primitive plant from the Jurassic Age. You may also find spectacled bears, hummingbirds, cocks of the rocks and around 500 species of orchids.

Its geology is stunning and intricate, consisting of peaks, canyons and huge and steep hills full of greenery in which in between the Urubamba River meanders to the lowland jungle. There rises Machu Picchu, the spiritual and resting place once used by the Inca nobility, because of the quality of its water, climate, isolation and surrounding nature. You can access to the archaeological site from the Inca Trail through the Inti Punku or Puerta del Sol, or from the town of Aguas Calientes where our hotel is located, using a bus or walking. Machu Picchu was built in the fifteenth century by Pachacutec and located 2,400 metres above sea level. Is built with granite rock extracted from the surrounding mountains, and comprises agricultural terraces that defy the slope of the hills, rooms, plazas, amphitheaters, hydraulic channels and the Intihuatana, a huge ceremonial stone.

Besides being a resting place, it appears that the Incas performed at the Citadel astronomical studies, agricultural research and worship rituals. Machu Picchu was discovered by chance in 1911 by the explorer Hiram Bingham, of Hawaiian origin, who was looking for Vilcabamba, the last refuge of the Incas.

Although the citadel, located about 120 kilometers from Cusco, is the main attraction, our visitors will be able to visit other beautiful places such as the Mandor waterfall, which can be reached after a gentle walk inside the beautiful forest , Putucusi hill located in front of Machu Picchu and whose vertical walls rise with stairs embedded in the rock, the traditional market of Aguas Calientes, the hot springs or mountain Huayna Picchu, which can be reached after walking 45 minutes down a steep path. From here you can have the best view of the Inca citadel, the snow-capped Cordillera Urubamba and the whole Historic Sanctuary. The result is worth the effort of the climb.

Hiram Bingham conveyed similar feelings in his book ‘The Lost City of the Incas’, written in 1948,’ I know no other place in the world that you can compare. Not only has it great snow peaks looming above the clouds more than two miles high, giant granite cliffs that rise thousands of feet above the foaming and roaring current, but also offers, in striking contrast, orchids and barriers of trees, the delicious beauty of lush vegetation and the mysterious sorcery of the forest.

Our visitors are welcome to visit this wonder to the world. The Tierra Viva Cusco Machu Picchu Hotel team will help you in whatever you need so you can live the best experience in the heart of the Inca Empire.