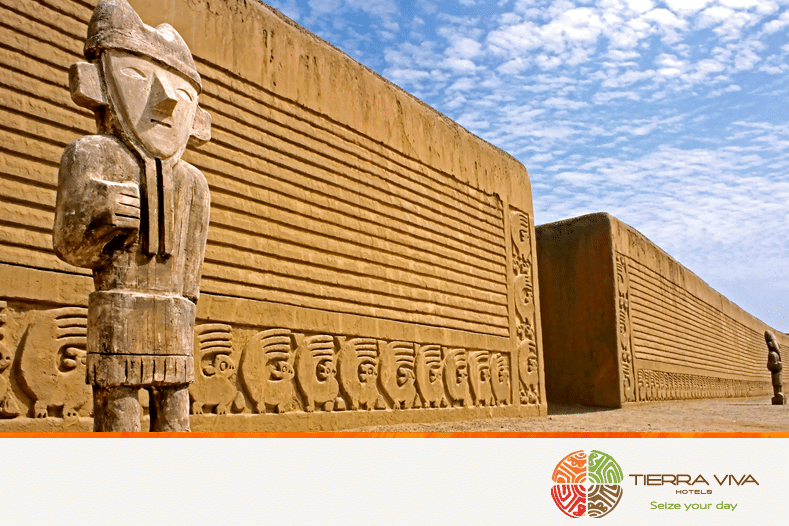 The history of Peru before the conquest is full of cultures that inhabited the length and breadth of our country and that will captivate you with its history. One of them is the Chimú, who settled on the north coast of Peru between 900 and 1470 and they made great architectural works such as Chan Chan, the largest adobe citadel in America and the second largest in the world.

If you plan to go to Trujillo, you can not miss a visit to this great archaeological complex. Here we tell you some details of its history and how to get to this place. Keep learning the history of Peru with Tierra Viva!

The Chimúes became a highly advanced civilization but with the arrival of the Incas to their territory, its golden age ended. In 1470, Túpac Yupanqui besieged this place, leaving the population totally isolated. 30 years later, the Chimú decided to rise up against the Incas but their effort was in vain: Huayna Cápac and his army burned and sacked the city, leaving it practically in ruins.

Currently, Chan Chan is the favorite destination for tourists who arrive in Trujillo and the citadel does not stop surprising us: in October of this year, archaeologists working in this place discovered 19 anthropomorphic wooden cultures and a corridor decorated with mud reliefs.

The history of Chan Chan is really exciting, so we recommend you that, along with your ticket, hire the service of a guide who will tell you every detail of the citadel.

How to get to Chan Chan

The citadel of Chan Chan is located just seven kilometers away from Trujillo city center.

Are you looking forward to getting to know this citadel on the north coast of Peru? We wait for you in our new hotel Tierra Viva Trujillo! Get to know our facilities and make your reservation at http://tierravivahoteles.com/tierra-viva-trujillo/.